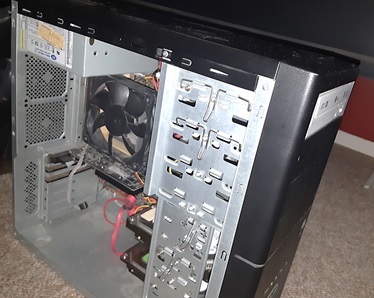 So, how do you decide when to dump your old PC? My answer is when you find yourself growing older while waiting for a response. Sigh.

In January 2015, I converted an old basement bedroom into my electronics lab. In this room, I do my soldering, electronics fabrication and testing, 3D printing and writing project-related computer code. When I set things up, the former owner of that bedroom donated is old gaming computer my hobby use, which continued until last week.

My son bought this gaming computer in around 2009. It came equipped with a great AMD Athlon 64 X2 dual core CPU running at 2 GHz. If you read the reviews, this was a great PC for its time. This workhorse has run Windows XP, Windows 7 and now Windows 10. But now, I find it really showing its age. I may be partly responsible for not upgrading RAM beyond 2GB.

In addition to writing code, I have used this PC for 3D printer and CNC control, as well as some writing and reading data from devices such as my scope, NanoVNA and digital microscope. No CAD or SDR though. But now, my machine takes 30-60 seconds to load the Arduino IDE (or Google Chrome for that matter) and compiling a program takes forever.

I normally run Open Hardware Monitor to keep track of machine performance. It tells me that my CPU is often running at 30-50% even when supposedly idle. Over the years, I have installed many applications which run services continuously in the background. And, of course, Windows itself is always trying to run anti-virus and update services which consume CPU cycles non stop.

So, I guess 12 years is a good run for any computer. Time to move on.

Dump Your Old PC for a Newer One

With a bit of online searching, I was able to find a used HP Elitedesk 800 G1 desktop for $200. I think this was a good deal on Kijiji and even better, the seller lived nearby. My new (old) lab PC now has a fourth-generation i5 CPU, 16GB RAM and 256GB solid state drive. What’s more, it is loaded with USB 3.0 slots and even has a serial port!

What’s more, I equipped this PC with a new D-Link AC1300 USB WIFI dongle for $35. This makes use of the new AC networking protocol, and also contains MU-MIMO allowing my Shaw Gateway to do beamforming for an even better connection. I am a really happy camper!