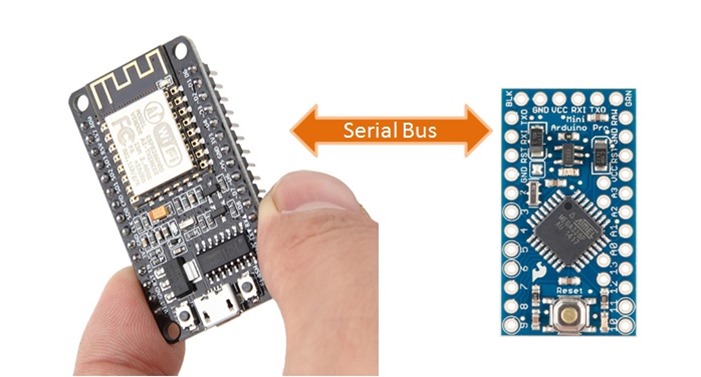 Another great way to overcome limitations might be the NodeMCU Arduino Pro Mini combination.

The NodeMCU is a combination of powerful microcontroller and a complete WiFi system. It’s great for internet of things (IoT) solutions. The main limitation is with having enough I/O pins to attach peripherals like sensors, motors, displays.

It recently occurred to me that a combination NodeMCU Arduino Pro Mini expansion solution would be worth a try.

The Arduino Pro Mini (shown at right above) is a tiny but full-fledged Arduino for around $2 on EBay. Even better, there is a 3.3V version. This is important because many devices (including NodeMCU) run on 3.3V and their pins are not compatible with the usual Arduino five volts.

Here are some of the key ideas I will try with this combination.

Recently, I wrote about expanding the NodeMCU with an I2C GPIO expansion board. But in hindsight, the NodeMCU Arduino Pro Mini combination would give you a more powerful (although perhaps more complex) solution at the same price.