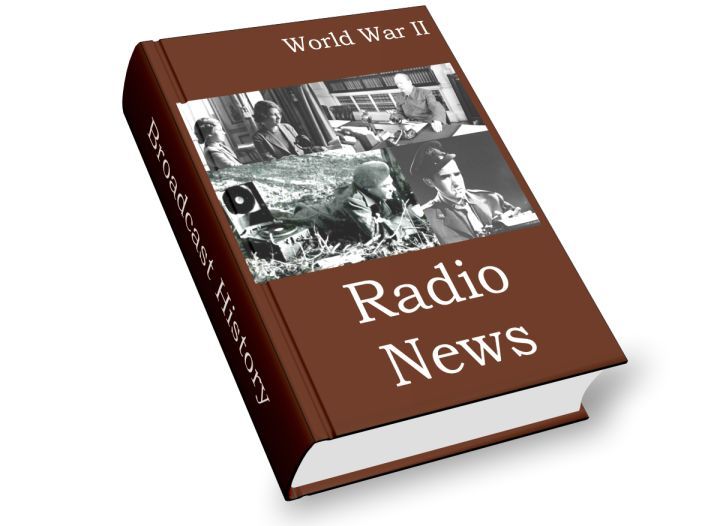 War radio news reporting was mainly the American networks and the BBC. ”If any single job since radio began could unanswerably justify the business of broadcasting as now conducted, CBS’ news coverage since 1938 might well be it.” (Time Magazine, 1941)

Here is how many Americans heard about the Pearl Harbor attack on December 7, 1941. During World War II reporters filed live or recorded on-the-scene news broadcasts. Most famous were Edward R. Murrow's reports from the London blitz during 1940-1941. Reporters covered all major battles, including live reports of troops landing in Normandy during D-Day. Check out this compilation of war radio news reporting.

Radio news covered World War II at home and abroad, delivering more news to more citizens than any other source. Radio’s unique value came from its mixture of popular programming combined with significantly increased news, news features, and commentary. Radio could entertain and inform the public faster and better than other media.

Broadcasters, and even Allied governments, went to great lengths to separate news from propaganda. Many radio programs were prepared and aired to motivate citizens to support the war effort, but these were not news. In fact, most allied countries separated government agencies dealing with censorship versus propaganda.

A curiosity of wartime broadcasting was the complete absence of weather information. Such information was viewed as useful to the enemy in planning and launching attacks. So, no weather reports on the radio for most of the war. There is a story of a live US football broadcast where fog was so heavy that the commentator could barely see the field. He found a way to broadcast the whole game without revealing the foggy conditions.

During the war, radio broadcasting served three important roles: informing, entertaining and boosting morale. As war approached, foreign news broadcasts grew in popularity. When war started, most people relied on newspapers as their primary news source. When war ended, most people relied on and trusted radio. At the outbreak of hostilities, 80% of homes and 30% of vehicles had radio receivers. Even though war severely curtailed radio manufacturing, listenership continued to grow. Radio news and public affairs content grew from 10% at the start to nearly 25% of programming at the end of the war. More than 90% of households spent their evenings in front of the radio.

Commercial radio actually boomed during the war years. Newspapers and magazines suffered from a newsprint shortage. There was no shortage of radio waves, though. Also, a surtax on excess profits led companies to spend more on radio advertising using funds that would otherwise have been taxed at 90%.

Radio broadcasting was declared to be an essential industry in most countries. Despite loosing staff to enlistment, sufficient work force was maintained. The shift to network programming helped radio share resources.

Network news increased mainly in evening hours, and by 1944 news specials and newscasts made up 16 to 20% of network program schedules. At first, because of technological limitations and censorship, war reporting was an after-the-fact reading of recent events, sometimes delayed by military requirements. Also, military censors distrusted live reports; in some countries, programs had to be scripted.

Perhaps the biggest innovation in war radio news reporting was the use of audio recording. Historically, broadcasters did not use recordings when reporting news. Global reporting logistics dictated change during the war. For example, many reports from Europe were recorded, relayed to North America by shortwave, and then subsequently broadcast. Lots of experimentation resulted in the shift from “cutting discs” to “wire recorders” and eventually paper or plastic-backed recording tape. Here in Canada, a short wave receiving station near Ottawa was used to record and relay European reports across the country.

Obviously, remote broadcasting came into its own during the war. During the D-Day invasion, U.S. network journalists set up mobile microphones next to the news teletypes. They conducted broadcast marathon, walking from desk to desk reporting the latest news coming in from Normandy. In short, radio news provided a running commentary of this amazing story.

We will describe war radio news censorship in our next article.