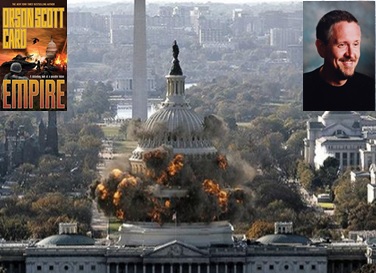 Keeping things civil seems to be impossible in contemporary society. Find out more about the risks of polarized politics in Empire, by Orson Scott Card.

I like Orson Scott Card. I enjoy his writing and appreciate him as a person. No buts. My views are unreserved. As a science fiction fan, I thoroughly enjoyed sharing the journeys of Ender Wiggin and associated characters over the years. His audio books are particularly brought to life by voice actor Stefan Rudnicki.

Recently, I stumbled upon OSC’s 2006 novel Empire. The story is of alternate history in a contemporary setting. Namely, civil war in the United States driven by polarized political views and subtle behind the scenes manipulation of the polity.

No spoilers here. But I will say this. I think it could happen. The scenario is not that much of a stretch from what we see every day.

You will find Empire a gripping story at many levels. One level is Tom Clancy like action. The second level is politics, past and present. But for me, the third level is more interesting: a cogent critique of how polarized political rhetoric effects ordinary people. In particular, I appreciate the critique of post-secondary education and media. Both fail to serve us well.

If you want a quick summary of Orson Scott Card’s critique, you can read the book’s afterword here.

As a long time science fiction fan, I first cut my teeth on the great Isaac Asimov. Empire generates memories of Hari Seldon and psychohistory. Even provides a brief mention.

Can great arcs of human (or galactic) history progress without conflict and periods of darkness? I find this to be a really good question, and one addressed by both Empire and Asimov’s Foundation books. These days, we seem to be entering a period of darkness without a clear idea of what light will emerge at the end of the tunnel.

By the way, Empire is part of a series of books and video games. If you want to learn more, watch this short interview with the creators. In the meantime, you can see the results of not keeping things civil in Empire.